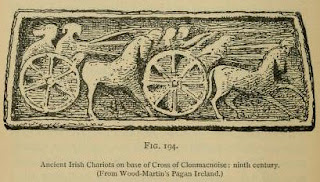 The Irish calendars commemorate Saint Odhran, whom tradition associates with Saint Patrick's household, on February 19. Indeed, Saint Odhran is credited with being Saint Patrick's chariot driver who willingly accepted martyrdom to save the life of his master. His sacrifice took on a particular  importance since the introduction of Christianity to Ireland did not involve large-scale martyrdom. This home-grown martyr was thus seen as a very special saint. A prayer in honour of Saint Odhran can be found here. Canon O'Hanlon has a good description of the popular legends surrounding the brave charioteer in Volume II of his Lives of the Irish Saints:

The Martyrologies of Tallagh, of Marianus O'Gorman, and of Donegal record on this day, Odran or Odhran, of Tir-aonaigh or of Tiri-oenaigh. From all we can learn, he became devotedly attached to the Irish Apostle, and he was a constant personal attendant on his missionary travels. Odran became a servant to St. Patrick, whom he served in the capacity of charioteer. We have no express mention of him, except incidentally, in different Lives of St. Patrick. From such sources, Colgan has compiled his eulogistic biography, adding notes to it. The Bollandist writers have inserted Acts of St. Odran, Martyr, in six paragraphs, at this day. This humble and devoted charioteer is classed among the disciples of the Irish Apostle.

On St. Patrick's return from Munster, about the year 451, in Colgan's opinion, and after, or during the year 456, according to Ussher, the Irish Apostle entered Hy-Failge territory. Here were two powerful chieftains ruling at the time: one was a wicked Pagan, Failge Berraide, who entertained a implacable hatred against St. Patrick, because he had destroyed the idol, known as Crom Cruach, an object of adoration among the Gentile Irish, while the other chief was named Failge Ros, who had conceived a great love and reverence towards the holy man. As the former had frequently boasted, that he would take the Apostle's life away, whenever the opportunity might be afforded; the present stage of his journeying, which brought him along the highway, not far from Failge Berraide's Castle, seemed favourable for this son of Belial's purpose. That district, since so well known as Offaly, at least in this part, was then ruled over by the merciless pagan, Failge Berraide. This wicked man's design was basely to take away by assassination the life of our great Irish Apostle; and, in the accomplishment of such a purpose, he resolved on arresting the progress of the Christian Religion, by effecting the destruction of its greatest promoter. However, Providence frustrated his purpose, although it does not seem, that St. Patrick had any suspicion of the threatened danger. Yet, his charioteer, Odhran, had some prevision of the consequences likely to ensue. In most accounts, it is said, that having had previous intimation of this design, Odran concealed his knowledge concerning it from St. Patrick, whom he induced to occupy the driver's seat in the chariot, whilst Odran himself should have some short time for rest. The holy Apostle most readily assented. He unsuspectingly relinquished his place, and assumed the reins, in order to gratify his servant's wish. They had passed from Birr, and were travelling along an ancient road, which bore in an eastern direction, north of the Slieve Bloom mountains, where their enemy lay in wait. Failge met the travellers on their journey. Rushing against Odran, whom he mistook for St. Patrick, the furious chief transfixed him, with a stroke of his lance. Horrified at the sight thus presented, the Apostle was about to pronounce a malediction on the murderer, when the dying Odran prayed it should rather descend on a very high tree, that grew on an adjoining hill, called Brig-damh. Yet, for his Satanic perfidy, the murderer was struck dead immediately afterwards; and as a just punishment for his grievous crime, his soul was buried in hell, while angels were seen bearing that of Odhran to heaven, where he joined the array of purple-robed martyrs. St. Patrick furthermore announced, that the posterity of that wicked Foilge should wane, and lose power, in the principality; while, Foilge Ros and his posterity should rule therein, which prediction was fulfilled. In an old Biburgensian Manuscript Life of St. Patrick, we are told, that when the soul of Foilge, for his wickedness, had been carried away to hell, the devil took possession of his living body, and dwelt in it, until St.Patrick came to the house of that cruel chief. It is stated, the Irish Apostle asked one of the servants for his master, and that he was told Foilge was within. "Call him to me," said Patrick. But, the servant returned, and told the Apostle in great sorrow, that he only found the dry bones of his master. Then said Patrick :"From the time, when Foilge butchered my charioteer before me, he was buried in hell, but the devil came to possess his body, so that while his soul was consigned to perdition, his body was also dishonoured by demoniac influences."

[O'Hanlon inserts an interesting footnote from author W.B. McCabe, who wrote a book of stories for younger readers which included the unhappy tale of Foilge:

The second tale, Foilge; or the Possessed, is a veritable Irish tradition. It is the earliest account that the author has been able to trace, of that belief, which still prevails in many parts of the world, viz., of an evil spirit entering into the body of a dead man, and making that dead man appear as if he were still living—a belief, it may be remarked, very different from that which prevails as to the demoniacs described in Scripture—that is, living men, into whose bodies an evil spirit had entered. Foilge as portrayed in the Irish legend, (Act. Sanct.vol. iii., pp. 131, 132) was the same in most respects as the modern vampire; in some particulars like to the malignant dead described in the Sagas of the Scandinavians.]

Attempts have been made to identify the place, where this martyrdom occurred. Afterwards, it received the name, Desart-Odran of Hy-Failge;... on the road, between Frankfort and Roscrea, is the little village of Killyon; and about two miles from the latter village, is yet shown the place, where Foilge attempted the life of St. Patrick.

Odran's name occurs, in some foreign Martyrologies; yet, his festival has been assigned to distinct days, from the present date. Thus, the 8th of May, the 27th of September, as also the 2nd and the 27th of October have been conjecturally mentioned, in connexion with it, by various Martyrologists. About, or soon after, the middle of the fifth century, this martyrdom of Odran is considered to have occurred. This saint is honoured as a martyr, chiefly on the 19th of February; but, in certain places, as we are informed, on the 27th of October. Some churches were formerly dedicated to him, in the country about Birr, and in the Ormonds...It is probable, that many of those circumstances related, as connected with St. Odran's death, are unreliable; although, we take it for granted, that this saint must have lost his life, for his attachment to the Christian faith, and while faithfully serving his illustrious master.